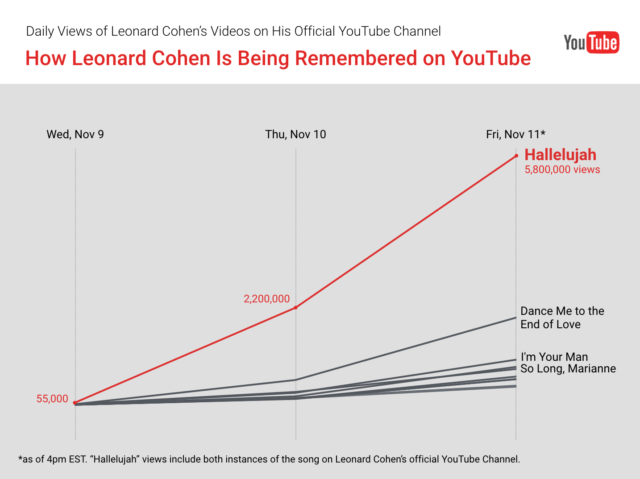 Following the announcement of Leonard Cohen’s death on November 10, “Hallelujah,” one of his most iconic songs, is today’s most-watched video on YouTube, with over 5.2 million views (as of 4pm EST).

Furthermore, today’s increase in views for “Hallelujah” has far outpaced the view increases to other videos on Leonard Cohen’s channel:

The resurgence of “Hallelujah” should come as no surprise. Since September 2014, it has been viewed over 35 million times, making it one of the most popular ‘80s songs on YouTube. Among Cohen’s catalogue, it’s his most popular track, with double the views of his second most-viewed song, “A Thousand Kisses Deep.”

Why is “Hallelujah” so unique? After all, when it was released in 1984, the song did not immediately become a commercial hit. Yet over the past 30 years, it has remained a core part of contemporary culture due to the high number of its covers by other artists. The most popular version on YouTube is Jeff Buckley’s rendition, which has been viewed over 75 million times since September 2014:

Yet famous covers are not the only source of timeless appeal for the song. YouTube creators have covered “Hallelujah” more than any other track release before 2010:

While Cohen may be gone, his music — particularly “Hallelujah” — has memorialized him as a once-in-a-generation talent. 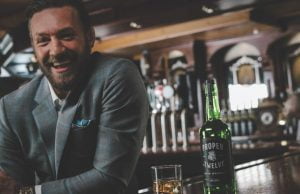 August 4, 2022
UFC superstar Conor McGregor is set to make his acting debut in a remake of the classic action movie Road House.McGregor, who last...