moe. has announced their return to Colorado with a two-night run in 2019. On Friday, May 31st, the Buffalo, NY rockers will perform at the Ogden Theatre in Denver, CO. Then, on Saturday, June 1st, they’ll make their return to Red Rocks Amphitheatre alongside Mike Gordon and White Denim.

In 2017, moe. was forced to cancel their headlining Red Rocks show following bassist Rob Derhak’s cancer diagnosis. They made their triumphant return to the legendary stage in 2018 with Pigeons Playing Ping Pong, which was followed by a successful year of touring in good health.

An online request period for the two-show bundled tickets and an exclusive Chuck Sperry event poster is currently underway here. The request period will end Tuesday, November 27th at 6 pm MT. Then, tickets go on sale to the general public on Friday, November 30th at 10 am MT and
may be purchased online here. 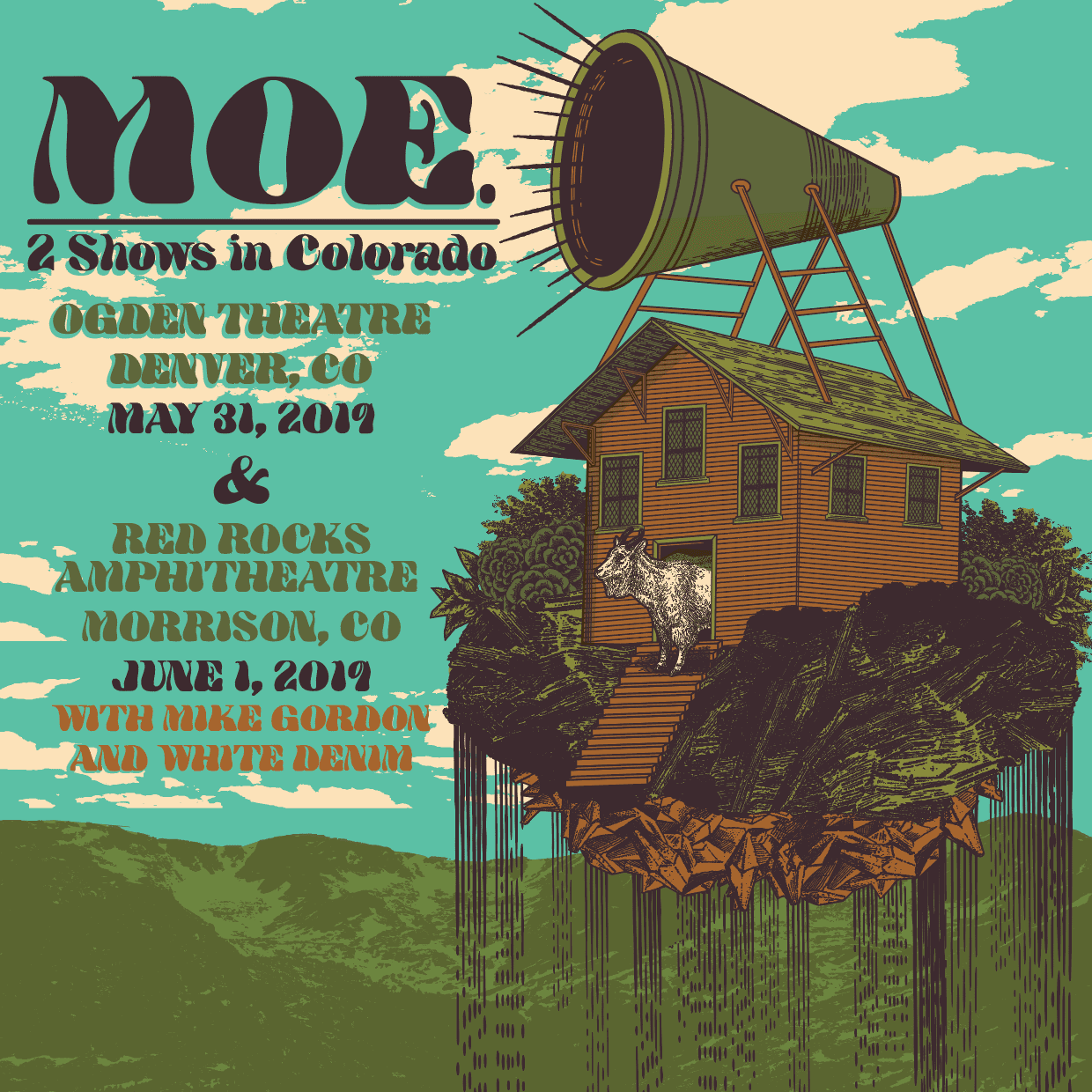 moe.’s Colorado run comes on the heels of their winter tour announcement, which will kick off on Friday, February 15th and Saturday, February 16th at the State Theatre in Portland, Maine. Then, on Sunday, February 17th, moe. will make their way to The Strand in Providence, RI. Finally, the following Saturday, February 23rd, the band will travel to the Big Apple for a performance at the storied Beacon Theatre.

While the new announcement certainly stokes fan excitement for next year, moe. still has plenty on their plate for the remainder of 2018. On Wednesday, November 28th, moe. will begin their run of late-2018 shows with a performance at Charleston Music Hall in Charleston, SC. They’ll continue through the southeast from there with stops in Orlando, FL (11/29); Fort Lauderdale, FL (11/30); St. Petersburg, FL (12/1); Ponte Vedra Beach, FL (12/2); Charlotte, NC (12/5); Birmingham, AL (12/6); and Atlanta, GA (12/7, 12/8) before capping the stretch with a show at Nashville, TN’s Marathon Music Works on Sunday, December 9th. Finally, to close out the year, the Buffalo-native band will head to nearby Rochester, NY for a two-night New Year’s run at Kodak Center on Sunday, December 30th and Monday, December 31st.

In the early weeks of 2019, ahead of their newly announced northeast run moe. will host their third-ever tropical throe.down in Runaway Bay, Jamaica. Head to the band’s website for more information.

Graphene and 2D materials could move electronics beyond ‘Moore’s Law’

June 3, 2020
New developments in spintronics could lead to graphene being used as a building block for next-generation electronics.

A promise to restore hearing