Dr. Dog and Shakey Graves have announced a co-headlining summer tour, which will see support from Caroline Rose during the first half of shows, and from Liz Cooper & The Stampede throughout the latter half.

Both band’s tour announcements note a two-night New York City run on September 14th and 15th, at a yet-to-be-determined location.

A pre-sale is currently underway through Shakey Graves here. Tickets go on sale to the general public this Friday, February 15th at 10 a.m. local time. Head to Dr. Dog or Shakey Graves’ websites for more information. 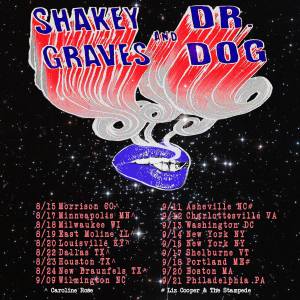 Pixel 4 is here to help

February 17, 2020
Venezuelan authorities suspended a Portuguese airline on Monday days after it carried opposition leader Juan Guaidó and his uncle home from an international tour...

Andy Frasco and the UN Royally Rumbles With Big Something at...

The Latest: Warren calls for party unity in taking on Trump

Mississippi and Tennessee Have Been Deluged With Near-Record Levels of Flooding....

Indiana professor is suspended for calling police on student who wouldn’t...

Chance the Rapper Formally Endorses the Most Corny Version of Himself

Music
On Sunday, a 17-year-old high school senior named Danny Diaz sent a tweet from a Chance the Rapper parody account that went viral, scoring over...