As summer (and outdoor concert season) continue to inch closer by the day, Britain’s Glastonbury Festival is the latest high-profile music event to share its first round of 2019. Event organizers for the famous music festival took to social media early Friday morning to announce The Killers, The Cure, Kylie, and Janet Jackson will lead the way for this year’s event. They will join previously-revealed headliner Stormzy.

As the bottom of the shared poster on Friday reads, “Many more acts and attractions to be announced across more than one hundred stages,” so fans attending this year’s event should begin festival stamina training now if they hope to be ready for the music marathon to take place across the pond this summer.

Glastonbury isn’t the only festival which shared lineup news for the coming summer concert season this week. Festivals here in North America including High Sierra Music Festival, Twiddle‘s Tumble Down Festival, Pilgrimage Festival, Bourbon & Beyond, Electric Forest, and the Netherlands’ Pinkpop are just a few of the events which announced or expanded their lineups in the last few days. Fans should expect more events to do the same as winter takes that warm transition into spring in the coming weeks.

Fans can visit the Glastonbury website for event and ticket info. 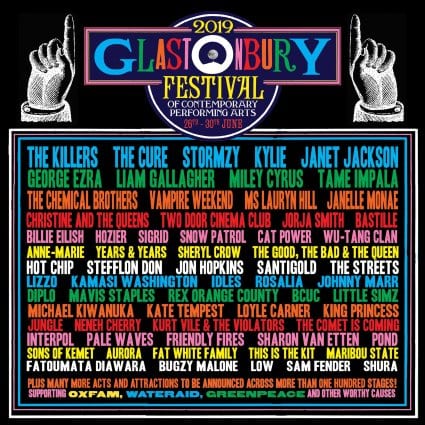 Aqueous Aboard For 2 ‘Live At The Drive’ Drive-In Concerts

Trump says U.S. will be ‘terminating’ relationship with WHO

Partygoer at Missouri’s Lake of Ozarks positive for COVID-19