Organizers of the KAABOO Del Mar have announced the lineup of music and comedy performers for their 2019 event, which will again take place at the Del Mar Racetrack and Fairgrounds in San Diego, CA on September 13th-15th this year. Artists including Kings of Leon, Dave Matthews Band, and Mumford & Sons will perform as the event headliners, with other top-tier billed artists including Duran Duran, Black Eyed Peas, OneRepublic, and Maren Morris.

Other music artists featured on the 2019 event poster, which was shared by the festival on Thursday morning, include Sheryl Crow, Snoop Dogg performing with Wu-Tang Clan, The Revivalists, Mark Ronson, Sublime with Rome, Silversun Pickups, Cheat Codes, Andrew McMahon & The Wilderness, and Toots & The Maytals, just to name a few.

The festival also boasts a healthy mix of veteran artists who don’t usually appear in the overabundant mix of festivals every summer, including The Bangles, REO Speedwagon, The Cult, Boyz II Men, Lifehouse, Switchfoot, Colbie Caillat, and Blind Melon.

Fans will also notice that the poster has a little spot right below the listing of music artists which states that the winner of this year’s American Idol season will also perform at the event.

This will be the festival’s fifth year in operation since launching in 2014. The event sold out all of its passes in 2018, and notably expanded the KAABOO brand to other parts of the country and globe in 2019 and beyond, including Texas’ Dallas Cowboys Stadium, and Grand Cayman.

Fans can click here for more information on this year’s event, in addition to purchasing tickets which are on sale now. 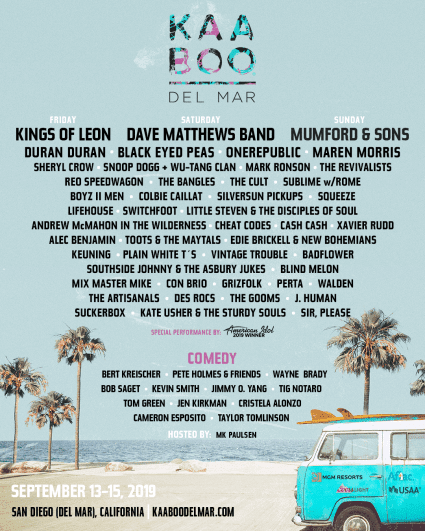 This Picture Proves a U.S. Nuclear Submarine Can Smash Into a...

There is no epidemic of fatal police shootings against unarmed Black...