A new documentary, Echo In The Canyon, will explore the explosion of music that came out of Los Angeles, CA’s Laurel Canyon neighborhood in the mid-1960’s. The film–which features appearances by the late Tom Petty as well as Brian Wilson, Ringo Starr, Eric Clapton, Stephen Stills, Jackson Browne, Graham Nash, David Crosby, Beck and many more—is set to premiere as part of the Los Angeles Film Festival on May 24th at Arclight’s Cinerama Dome and the Landmark, followed by a New York premiere at the Angelika and The Landmark at 57 West on May 31st.

Directed by Andrew Slater, Echo In The Canyon features rare archival footage and interviews with artists and musicians that were around during the 1960’s, or were inspired by the music that came out of it. “The music that came out of the Laurel Canyon scene was inspiring to my generation of songwriters,” says Jakob Dylan (Bob Dylan’s son), the film’s star and executive producer.

According to a press release,

‘Echo In The Canyon’ celebrates the explosion of popular music that came out of LA’s Laurel Canyon in the mid-60s as folk went electric and The Byrds, The Beach Boys, Buffalo Springfield and The Mamas and the Papas gave birth to the California Sound.  It was a moment (1965 to 1967) when bands came to LA to emulate The Beatles and Laurel Canyon emerged as a hotbed of creativity and collaboration for a new generation of musicians who would soon put an indelible stamp on the history of American popular music.

Watch the trailer for Echo In The Canyon below:

Echo In The Canyon (Trailer)

Both premiers in Los Angeles and New York City will feature performances by musicians from the film all weekend. 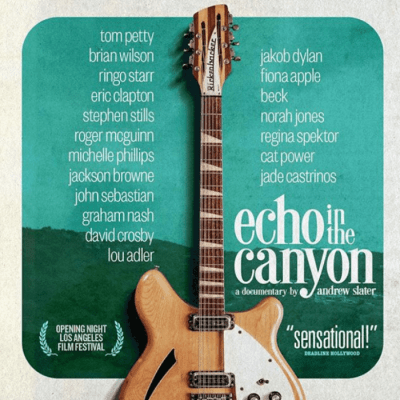 George Floyd begged for help — it didn’t mean he could...

July 3, 2020
Doctors and scientists call the myth a “medical misconception used to propagate injustice or violence.”

Slip Into the Long Weekend With a Soviet Spritz

Music
Cornell University Press director Dean Smith shared insights into Peter Conners’ 2017 book Cornell ’77: The Music, The Myth And The Magnificence Of The...