It can be hard to remember it based on the cold, rainy weather we’ve had recently, but the middle of May is here. That means being outside, enjoying the flowers, and looking ahead to months more of being out and about before the temperature inevitably drops again and we go into our hibernation modes.

One of the great pleasures of this time of year is the street festival — those events that transform our ordinary Main Streets or town commons into performance spaces and pop-up block parties. There are few pleasures greater than heading into town unaware, stumbling onto one of these events already in progress, and getting swept up in it all.

At the risk of taking that unexpected joy away from some, the Advocate is highlighting a smattering of what the region has to offer in the coming weeks and months. So get out your calendars and get ready to fill up some weekends.

Gone by is the Pride Parade, which actually shuts down Main Street to traffic and fills the streets with rainbow banners. But coming up this weekend is another yearly event that seeks to fill downtown Northampton with music made by young students. Springfest, run by the Northampton Community Music Center, is celebrating its 25th year of existence on Saturday.

“We’ve always timed it to be the same weekend as the Smith (College) commencement, so there’s hordes of people in town,” says Jason Trotta, executive director of the Northampton Community Music Center. “You really feel the fullness of the pedestrian traffic.”

The event will kick off at Pulaski Park at 10:30 a.m. with guest speaker Mayor David Narkewicz, who will make a proclamation about the event. From 11 to 3, student musicians will perform at the steps of City Hall, in Pulaski Park, and at the Art Kiosk in front of the First Churches. Trotta describes the largest performances — those of the Suzuki violin and cello students — as a “sea of cellos and violins.”

“Often music is done inside while its beautiful outside, so (with Springfest) we asked ‘how can we be a presence outside and in public and show off the talent that exists here in the school?” Trotta says.

New on the program this year will be a virtuoso ensemble of the center’s most advanced players, directed by instructor Emily Greene, who will perform sophisticated arrangements of classical music for multiple string instruments. Another new performance is a blues jam, directed by guitar instructor Adam Bosse.

In addition, groups that have performed in years past are making their returns, including an all-senior (55+) brass and wind group called the New Horizons Band directed by Jacqueline Smith, the Ku’umba Women’s Choir led by Evelyn Harris, and the piano, voice, guitar, violin, cello, viola, and other students at the school.

The event is a fundraiser for the school’s scholarship program, which Trotta says is “exploding.” Trotta expects the event to raise about $13,000, a fraction of the $60,000 that was spent on scholarships over the past year.

“Just within the past two years, the need for scholarships increased 50 percent,” he says.

That is partly due to members of the refugee and immigrant communities, who have learned about the school through word of mouth.

“Music is a great way, if you don’t have a strong command of the language, to communicate and assimilate in a community,” Trotta says. 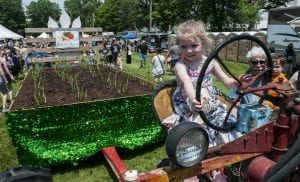 Fiona McNutt, 4, of Amherst takes a turn sitting in the driver’s seat of a McCormick Farmall tractor that pulled the Boisvert Farm asparagus float to the WGBY Asparagus Festival on the Hadley Town Common on Saturday, June 2, 2018.

The Asparagus Festival is the perfect intersection of food, games, music, sitting in the grass, visiting vendors in tents, and Hadley’s favorite vegetable: asparagus.

Held on the town common, which is a mile-long swath of grass that encompasses West Street, parking is usually to the north of Route 9 while the activities are to the south.

Put on by Public Television Station WGBY, the event also features characters like Curious George and the Very Hungry Caterpillar and lots of activities to keep little ones entertained — little realizing that the theme of the event is to eat their vegetables.

But asparagus isn’t all that bad, especially when wrapped in bacon or made into ice cream, two popular ways to eat it during festivals past.

Known as “Hadley grass,” asparagus was once a mainstay of the Western Mass economy. Marie Waechter, director of community relations and events at WGBY, says that celebrating asparagus’s long history in Hadley is a way to also celebrate all things local. Local restaurants will cook up their takes on interesting asparagus dishes, and local breweries will be pouring their locally-made beer.

This year’s special guest will be America’s Test Kitchen and Dan Souza, editor in chief of Cooks Illustrated Magazine. Souza will also serve as one of the judges of the asparagus bunching contest, an agricultural hand skill, according to Waechter.

Look for asparagus tempura with dipping sauce and other exciting ways to eat this long, green vegetable.

Strolling of the Heifers, downtown Brattleboro

How often do you get to see cows marching along in a parade? Well, in Brattleboro, Vermont, this happens once a year during the Strolling of the Heifers weekend in early June. This street festival/ parade features a wide variety of events starting Friday, June 7, and running through Sunday, June 9, including a downtown street festival on Friday that also includes specialty foods and drinks from across the state of Vermont as well as the Great New England Bundt Cake Competition Finals. Fast forward to Saturday, and the parade itself includes thousands of onlookers and the cows take front and center.

And then on Sunday, the weekend festivities wind down with the Heifers’ Famous Farmers Breakfast from 9 a.m. to 1 p.m. at the Marina Restaurant featuring local organic breakfast or brunch. A hearty breakfast is followed up with the Tour De Heifer, 15, 30, and 60-mile cycling tours throughout the morning and afternoon. The Strolling of the Heifers’ final day also includes a farm tour from 9:30 a.m. to 4 p.m. throughout the city of Brattleboro. 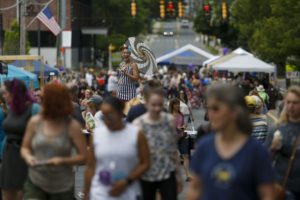 Easthampton’s own block party outdoor street fair has a lot going on and more than 100 volunteers every year planning the pandominum of fun at Cultural Chaos. What you can you find at this street festival? In years past, everything from stand-up comics to local rock bands, food vendors, giant puppets, interactive make-your-own poetry, a mini escape room exhibit, BMX style biking, and much more.

For 2019, Cultural Chaos is running with a “Show us Your Culture!” theme with plenty of events for the more than typically 10,000 people who show up to the street festival. It’ll be a day of music, local food, open studios, stilt-walkers, and performances that highlight the rich artistic and cultural Valley that we call home, while celebrating local area businesses and restaurants.

Tasting the Valley … one bite at a time

Flowers are budding on the trees and there’s the scent of local cuisine wafting through a picturesque New England town common. It’s time for the Taste Of Amherst, where local businesses, restaurants, vendors, and live music come together on the Amherst Town Common from Thursday, June 13, through Saturday, June 15, that’s free and open to the public.

Later this summer, there’s also the 5th Annual Westfield Food Fest from August 23 to 24 in the heart of downtown Westfield on Elm Street. The two-day free event includes local restaurants, food trucks, and live music. On Friday, the food fest takes place from 5 to 10 p.m. and on Saturday it takes place from 12 to 9 p.m.

On June 15th, Franklin County celebrates the LGBTQIA+ communities with its annual Franklin County Pride, a volunteer-run and community organized parade celebrating inclusivity, equality, and raising up the voices of lesbian, gay, bisexual, transgender, queer, intersex, and asexual people throughout the Valley and beyond. Franklin County Pride includes a march and rally that kicks off with the Pride Parade from 12 p.m. to 1 p.m. at 195 Federal Street in Greenfield.

There’s also a Pride Rally & Festival, including local LGBTQIA+ entertainers, speakers, and artists at the Greenfield Energy Park, 50 Miles St., from 12:30 to 3 p.m., which also features local food vendors, artisans, and community organization tables. And then the after party, at a location to be determined, is set to take place throughout the day and well into the evening from 3 p.m. until midnight.

But before the parade event starts, why not stop by Hawks & Reed Performing Arts Center for Drag Brunch? This is the second year of the annual Franklin County Pride Drag Brunch, which will take place from 10 a.m. to 11:30 a.m. with more details to be announced.

“We recognize that our true liberation is intrinsically linked with the liberation of the most marginalized among us,” the event’s website reads. “Through our FC Pride Grants Program [launched in the fall of 2018], we provide small grants to LGBTQIA+ groups throughout Franklin County that embody the core values of FC Pride.”

Each summer, downtown Springfield’s Court Square is filled with the sound of jazz. This year’s Springfield Jazz and Roots Festival will be the sixth of its kind, according to Kristin Neville, founding director of the nonprofit Blues to Green, which produces the event.

“On that day, (Court Square) comes alive and there’s music that is performed by locally-loved artists as well as nationally and internationally known artists who represent the roots of American music from jazz to blues to gospel and latin jazz, and music that came out of the African diaspora — and its evolution,” Neville says.

“He’s sort of my guiding spirit, and I think his life and his spirit and his music is reflected in the festival,” Neville says, adding that his music was a connecting and unifying force in many people’s lives. “He’s very present in what we do.”

As far as the music itself, Neville says that jazz lends itself well to a festival atmosphere.

“It’s very unique to this American experience and it is sort of a democratic kind of musical making experience, where more people are really putting themselves into it and have more freedom to share their own voices and respond to each other in the process of making the music,” she says.

As the festival has evolved, Neville says she has wanted to tie it to having a positive vision for the city of Springfield, including support for biking to the festival and working with Springfield organization Gardening the Community to promote healthy food offerings.

The event takes place from 11 a.m. to 10 p.m. and is free and open to the public. Specific artists have not been announced, but former artists have included Maceo Parker, Sweet Honey and the Rock, Taj Mahal, and younger artists like Christian Scott. An announcement of the full line-up will be made in the coming weeks at springfieldjazzfest.com.

China says will work with the U.S. to address each other’s core concerns

Variation in transplant centers’ use of less-than-ideal organs

January 24, 2020
The two victims were struck by a snowplow north of the Kansas State University campus in Manhattan, authorities said.

January 30, 2017
Valley Advocate
One Week. Still Alive. My liberal friends are freaking over the prospect of the 45th president. But to be fair and balanced, I’ve decided to...