There’s usually a bit of a lull between the end of one theater season and the start of the next –  the spring pause before the summer rush. But the pause keeps getting briefer and the seasons are starting to overlap. Take this week, when three Berkshire theaters open their summer festivals, two Hartford companies complete their fall-to-spring schedules, and a Vermont theater retires a repertoire staple.

Hold These Truths, at Barrington Stage in Pittsfield May 22-June 8, revisits the racist internment of over 100,000 Japanese-Americans during the Second World War, recounted by one man who was caught up in it. Faced with unjust imprisonment, Gordon Hirabayashi refused, and took his case all the way to the Supreme Court. 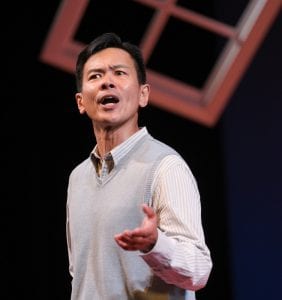 The title of Jeanne Sakata’s 90-minute play comes from that foundational American document that declared the “self-evident” truths of people’s “unalienable rights.” In my review of New Century Theatre’s production two summers ago, I called it “not only searingly suggestive of our current national crisis, but a heartbreaking, infuriating, inspiring and energizing story in its own right.”

At Barrington Stage, Hirabayashi is played by Joel de la Fuente, who has taken the solo show to numerous venues across the country. The piece can be seen, perhaps, as an ironic response to his current role in The Man in the High Castle, the counterfactual TV series that imagines a post-WWII West Coast occupied by the victorious Japanese.

The Goat, or, Who Is Sylvia? is Edward Albee’s squirmy fable of a marriage headed for the rocks – or rather, the farmyard. It’s at the Berkshire Theatre Group’s Unicorn Theatre in Stockbridge through June 15.

The extramarital affair that shakes the foundations of a comfortable middle-class marriage is husband Martin’s secret passion for one Sylvia, the titular caprine. (The title’s question comes from a Shakespearean song that toys with the meaning of “love is blind.”) Albee draws that metaphor to its squalid conclusion while asking us, his appalled audience, to consider our own comfortable assumptions about love, desire and taboo. 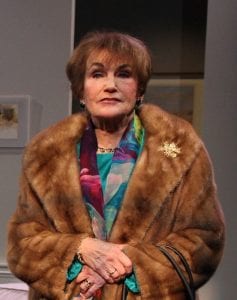 The Waverly Gallery, at Shakespeare & Company in Lenox through July 14, premiered in 1999 and was recently revived on Broadway starring Elaine May and Joan Allen. Here it’s led by S&Co favorites Annette Miller and Elizabeth Aspenlieder, under the direction of the company’s founder, Tina Packer.

Kenneth Lonergan’s play focuses on Gladys Green, octogenarian proprietor of a boutique Greenwich Village art gallery who is losing her business even as she loses her grip. It’s a portrait of a vigorous, feisty woman battling the slippery slope of senility.

Lonergan’s gift for finding mordant, even zany humor in precarious situations is evident in his other plays, This Is Our Youth and Lobby Hero, as well as the screenplays for movies ranging from Analyze This to Manchester by the Sea. Here it keeps a domestic tragedy from turning maudlin, both mourning and celebrating the spirit of an old-school “character.”

Some years ago I enthusiastically reviewed a world-premiere musical at Hartford Stage, called A Gentleman’s Guide to Love and Murder, based on the classic Alec Guinness film Kind Hearts and Coronets. From Hartford it moved to Broadway and won a fistful of awards. 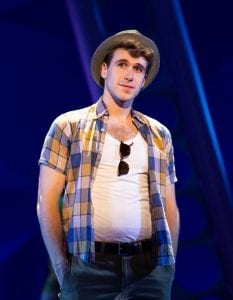 A similar trajectory must be in the company’s thoughts as it premieres another musical adapted from the big screen. The Flamingo Kid is based on the 1984 film about a Brooklyn teenager whose summer job at the posh El Flamingo Beach Club turns his working-class life inside out.

The movie had a soundtrack of hits from the ’50s and pre-Beatles ’60s. This stage version has book and lyrics by Robert L. Freedman, who penned Gentleman’s Guide, and music by Scott Frankel. After two weeks of previews, it officially opens on May 24 and runs through June 9. 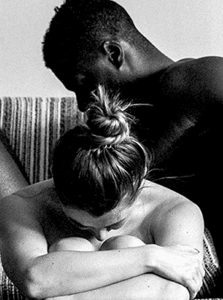 I missed Actually when it premiered in Williamstown two summers ago, on its way to New York, so I’m looking forward to its revival at Hartford’s TheaterWorks, May 22-June 23. The two-hander by Anna Ziegler finds two Princeton first-years, African-American Tom and white Amber (Ronald Emile and Arielle Siegel) sorting through the fraught aftermath of an impulsive sexual encounter.

The New York press applauded the play’s focus on “the open field of contention that is college life today” in the #MeToo era, and found it “a smart, profoundly painful exploration of [a] murky, treacherous sexual culture.”

In Brattleboro, Vermont, this weekend, Sandglass Theater gives the final performances of its award-winning, world-toured D-Generation: An Exaltation of Larks, a puppets-and-humans play that premiered in 2012 at the Ko Festival of Performance in Amherst. Not your typical puppet show (nor is Sandglass at all your typical puppet theater), it was devised from interactions with elders with dementia, whose words comprise the script. 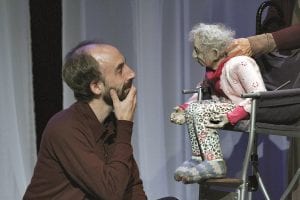 In it, four old folks, represented by beautifully detailed puppets, interact amusingly and movingly with each other and the puppeteers. Gazing at intriguing images – like an elegant couple dancing at the edge of a city rooftop, or the larks that give the piece its subtitle – they free-associate (there are no “wrong” answers)  and co-create wacky, imaginative stories which are then transformed into a puppet-theater performance.

D-Generation’s farewell showings can be seen May 24-25 at the New England Youth Theatre, 100 Flat Street in Brattleboro.

Chris Rohmann is at StageStruck@crocker.com and valleyadvocate.com/author/chris-rohmann

Investing in the next generation of measurement on YouTube

Iraq, Kuwait on alert as coronavirus deaths rise in Iran

February 21, 2020
Iraqi and Kuwaiti authorities were on high alert Friday after banning travel the previous day to and from Iran, where authorities say the death...

South Korea accepted that its efforts to stop the coronavirus from...

China’s Hubei to add virus cases back to tally after methodology...

A little good is good enough — excuses and ‘indulgence effects’...

Frozen bird turns out to be 46,000-year-old horned lark

Current
National Park Service takes unprecedented step to use entrance fees to keep major parks open. The fees will be used for trash clean up...