Activists with PHENOM (Public Higher Education Network of Massachusetts), accused Massachusetts Speaker Robert DeLeo of “name calling and spreading misinformation” following a tweet from DeLeo stating that the activists had used “Trumpian tactics,” in their efforts to characterize their attempts to meet with him. 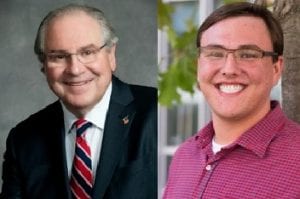 Zac Bears, executive director of PHENOM and a UMass Amherst alum, said DeLeo’s tweet was an example of “Trumpian tactics,” as well.

“Student organizers spent days trying to share stories with the Speaker about the crisis of hunger, homelessness, and unaffordability that thousands of students face on a daily basis due to state funding cuts for public higher education. Clearly, he realizes that it was a mistake not to engage personally with the students and is attempting to change the story,” Bears said.

In his tweet, DeLeo disputed that he had ignored the representatives of PHENOM and wrote that his staff and other House members met with them multiple times.

Bears said students had been speaking with staff members for months but had hoped to speak with DeLeo directly, as they had during the same period with Senate President Karen Spilka and leaders of the Joint Committee on Higher Education. 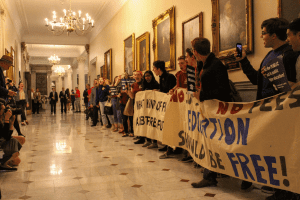 Activists from PHENOM hold signs outside of Massachusetts House Speaker Robert DeLeo’s office on day five of an action to bring attention to the affordability of higher education. Photo courtesy of PHENOM

“Students had been meeting with [Speaker DeLeo’s] staff and felt the message was not getting through,” Bears said. “We thought meeting directly with the speaker might change that. We had multiple meetings with staff and still no one from the office had put forth a plan or said this is what we’re going to do.”

Catherine Williams, spokesperson for Speaker DeLeo’s office, confirmed that members of PHENOM had met with DeLeo’s staff, but that DeLeo did not meet with them. She said students met with DeLeo’s chief education policy analyst both in October and earlier this month, and with DeLeo’s deputy chief of staff multiple times over the past week of sit-ins.

“The House is proud of its commitment to higher education and taking on the issue of combating student debt,” Williams wrote in a statement. “Under Speaker DeLeo’s leadership, for the first time in more than a decade, the House led efforts to freeze tuition and fees at UMass for two budget cycles starting in 2013. This year, the House increased funding to UMass by nearly $40 million, providing a total of $558 million in fiscal year 2020, and also allocated more than $100 million for Massachusetts student scholarships. The question of this year’s funding will be a subject of conference committee discussions between the House and Senate.”

“Every student I’ve talked to knows someone who couldn’t afford to stay at a state school,” he said.

Bears and other activists stated they were threatened with arrest when attempting to conduct a sit-in in the Speaker’s office. Bears also said he was told by a “court officer” at the State House that facial recognition software is used in the building, something DeLeo disputed.

“After students moved to respectfully sit in the hall outside Speaker DeLeo’s office in the afternoon, I had a conversation with a court officer who stated ‘I probably shouldn’t tell you this,’ and then described details of a facial recognition system in operation at the State House and a law enforcement staging area on the second floor of the building. The officer stated that the system matches faces of people who walk through the public entrances with data from law enforcement databases, particularly mentioning ‘outstanding warrants.’ The officer also stated that the system has flagged individuals in the past without mentioning specific cases,” Bears said, reiterating a claim he made in a tweet of his own.

In his tweet, DeLeo said he values participation by all stakeholders and that everyone is entitled to their own opinion, but also said that people are not entitled to “their own facts.”

“Whether they’re alleging they were threatened with arrest, ignored or that the State House uses facial recognition technology, these students have opted to present their own, wildly inaccurate facts,” DeLeo wrote. “There was no threat of arrest, there is no such technology used at the State House, and my staff and House members met with them on multiple occasions.”

Members of the activist group claimed to be treated poorly by DeLeo’s staff.

“Throughout the sit-in, members of the Speaker’s staff accused us of being liars while refusing to acknowledge previous statements they made, questioned whether the sit-in was ‘productive,’ and exhibited a general pattern of hostility,” said Alli Young, a UMass Amherst student. “If the Speaker truly values ‘participation by all stakeholders,’ why is this public smear the first message directed at students in his name?”

Williams said that DeLeo’s office never threatened them with arrest.

Rep. Lindsay Sabadosa of Northampton said she sat with the students during the final day of their sit-in and tried to talk with DeLeo about getting him to meet with them.

“What I was told was that the Speaker is willing to meet with anyone, but that the students had not gone about the process the way his office would have liked,” Sabadosa said.

Sabadosa said she did not believe this was the right approach the Speaker’s office should take, and told that to staff members.

“Students should have a voice in the decision making process,” Sabadosa said. “I don’t think this is the last time students are going to be in the building given their pretty powerful concerns about what college debt looks like.”

As for DeLeo’s comments about the students using “Trumpian tactics,” Sabadosa said that it has historically been easy to dismiss the voices of young people in the political realm, but that leaders in the State House need to listen to them.

“There is nothing Trumpian about movement building; it is how the U.S. has made progress,” she said. “Until the Legislature catches up with what goes on outside the building, those actions [by students] are going to continue to be powerful drivers.”

In the mean time, students still hope that legislators, including DeLeo, will listen to them about the issues of student affordability.

“We hope that the Speaker will reconsider his approach, meet directly with the students and workers who are suffering through a deep crisis, and push his Higher Education Committee to schedule a vote to report favorably on broadly-supported solutions like the Cherish Act and Debt Free Future Act,” said UMass Amherst student James Cordero.

Stagestruck: Curtain Up on Stage 3

Stagestruck: In the Zoom Room, Part 2

Stagestruck: In the Zoom Room, part 1

Apple Wants to Claim All of Fruitdom As Its Intellectual Property

August 10, 2020
Image: Change.org petition by PrepearPears: the arch-goddess of the fruit pantheon, the inspiration of Cézanne, and to the untrained eye,

Fallout 76 Doesn’t Totally Suck Anymore, Try it With All the...

A Vampire Horror About Stating the Obvious