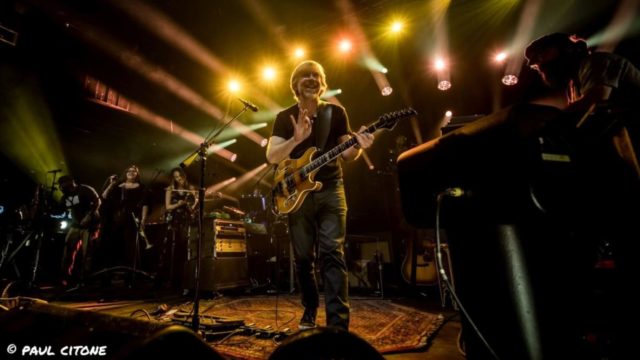 Guitarist Trey Anastasio of Phish brought his Trey Anastasio Band ensemble back to The Wiltern in Los Angeles on Saturday for their second of two shows at the venue. TAB debuted a new original entitled “All Pretending” within the first set and fit a cover of “Over The Rainbow” in the encore.

The band kicked off the show with the Phish classic “Blaze On” and then gave trombonist Natalie Cressman a chance to shine on “Mozambique.” From there, the group presented the tour debut of “My Problem Right There” and went on to perform their rendition of Phish’s “Camel Walk” and the TAB staple “Drifting.” Next up was a horn-driven “Undermind” and the Page McConnell-penned instrumental “Magilla.” Anastasio then led his troupe through the first-ever “All Pretending,” a rocker penned by Trey and lyricist Tom Marshall with a deep groove that would fit nicely within the Ghosts Of The Forest suite. Instrumental “Sidewalks Of San Francisco” and a slightly extended “Set Your Soul Free” brought the set to a close.

Anastasio and company opened the second set with the tour debut of Ghosts Of The Forest number “Sightless Escape” and a fierce “Sand” featuring wah-heavy guitar work from Trey. “Valentine” came next before Trey returned to the Ghosts Of The Forest repertoire for the melancholy “Friend.” Saxophonist James Casey was spotlighted on “Burlap Sack & Pumps” ahead of a “Gotta Jibboo” that contained impressive interplay between Anastasio and keyboardist Ray Paczkowski. TAB then romped through “46 Days” and offered their second rendition of the Phish ballad “Shade.” A short-but-sweet “Plasma” and the beloved “First Tube” capped the frame.

Last night’s encore started with an acapella “Over The Rainbow” sung by Trey, Jennifer Hartswick, James Casey and Natalie Cressman. “Over The Rainbow,” performed previously by TAB on October 27, 2017 in Las Vegas, was composed for the 1939 film The Wizard Of Oz by Harold Arlen and features lyrics by Yip Harburg. The ballad “Show Of Life” came next and then the show ended with a typically potent “Push On ‘Til The Day.”

Over The Rainbow Rehearsal

Fan-Shot Videos (Captured by pr except where noted)

Encore: Somewhere Over The Rainbow [1], Show Of Life, Push On ‘Til The Day

August 2, 2018
The product is making waves in the market.