Several tonnes of highly explosive material found at Beirut’s port, just weeks after the same chemical was blamed for causing a massive detonation there, had been in storage for 15 years, the Lebanese president said on Friday. The army said on Sept. 2 it had discovered a stockpile close to the port of 4.35 tonnes of ammonium nitrate, the highly explosive chemical blamed for the huge Aug. 4 blast that killed about 190 people and ruined a swathe of Beirut. Critics said the lack of proper care and attention in storing such highly explosive material revealed the depth of dysfunction in the way Lebanon has been governed.

September 27, 2016
Not to be out-droned by the foldable Karma, DJI has today announced the Mavic Pro, its own less-expensive drone that folds up into a... 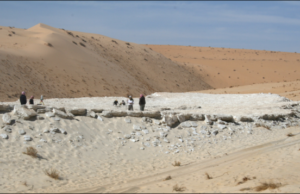 September 18, 2020
Archaeologists in Saudi Arabia have discovered seven well-preserved footprints belonging to humans. Dated to around 120,000 years ago, these appear to be the oldest...