11E1even Group has announced that the next installment of the culinary/concert collaboration series Dine From Out There will feature Paul Hoffman (Greensky Bluegrass) and Holly Bowling (Ghost Light) on the lawn of The Greenbriar Inn in Boulder, CO on October 4th.

Related: Leap Year Sessions: How Greensky Bluegrass Packed The “Arc Of A Tour” Into One Week In An Empty Room [Interview]

This next installment of Dine From Out There will feature the first-ever collaboration between Hoffman and Bowling. Though the two have shared a stage before—multiple times, in fact—during Greensky’s winter tour with opening support from Ghost Light, this will mark the first time the two musicians have played together as a duo. The two-set performance is paired with a four-course meal from six star Michelin chef Merlin Verrier and Benny & Zoid Selections, founded by Eric “Benny” Bloom and Ryan Zoidis (Lettuce).

Tickets for Dine From Out There featuring Paul Hoffman and Holly Bowling at The Greenbriar Inn on October 4th are available here. 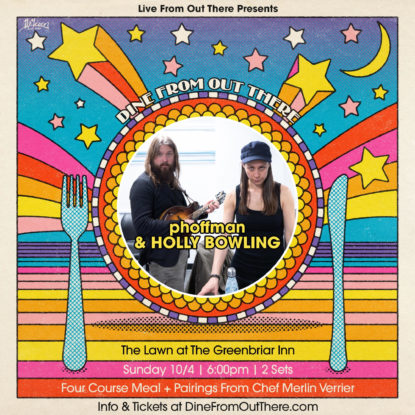 The post Paul Hoffman, Holly Bowling To Collaborate For ‘Dine From Out There’ In Boulder appeared first on L4LM. September 3, 2019
The Global Entry trusted traveler program has been plagued by lengthy application delays. Some travelers report over 100 days to renew.