Five years ago today, Tedeschi Trucks Band organized a star-studded tribute to the legendary Joe Cocker at LOCKN’ Festival on September 11, 2015. The renowned singer died the previous December — the set was originally conceived as a collaboration with Cocker — and TTB honored Joe by revisiting the famed Mad Dogs & Englishman tour and live album of the early 1970s with a little help from their friends.

TTB kicked off the set with Susan Tedeschi leading the band through “The Letter” a song that has remianed a staple in the Tedeschi Trucks repertoire ever since. Cocker had his first Top 10 hit in the U.S. with the Box Tops tune. Much like the original Mad Dogs & Englishman tour, the LOCKN’ stage was full of musicians and TTB welcomed the first guest of the night, original Mad Dog & Englishman tour member Claudia Lennear for “Cry Me A River” followed by the late great Leon Russell — who was bandleader on the Mad Dogs tour — taking the stage to duet with Lennear on “Girl From The North Country.”

Next, Russell led the way on “Dixie Lullaby” while famed singer-songwriter and Mad Dogs member Rita Coolidge handled “Bird On A Wire.” The Band sing-a-long “The Weight” followed with Tedeschi, Russell, Coolidge, Lennear and Pamela Polland all joining in. Widespread Panic’s John Bell then led the group through “Delta Lady” while the TTB vocalists circled up for “Let’s Go Get Stoned.” Then, Doyle Bramhall II delivered a dreamy version of the George Harrison-penned “Something” while Warren Haynes and Anders Osborne provided a double attack on vocals and guitar respectively for “She Came In Through The Bathroom Window,” both tracks Cocker covered from The Beatles 1969 album Abbey Road.

While Traffic’s Dave Mason wrote the rock anthem “Feelin’ Alright,” Cocker’s cover became the definitive version. For the LOCKN’ performance, Mason came out and led a stellar performance of the song. The Black Crowes frontman Chris Robinson would help bring the set to a close with “Sticks & Stones” and “Space Captain,” the latter a duet with Tedeschi. The all-star band would reemerge for an encore that saw Leon leading the band on the album and tour’s titular song, the Russell-penned “The Ballad Of Mad Dogs & Englishman,” followed by Robinson and Tedeschi leading everyone on Cocker’s signature song, The Beatles’ “A Little Help From My Friends.”

Listen to the entire TTB Mad Dogs & Englishmen Joe Cocker tribute set from LOCKN’ 2015 below via Alex Leary for this edition of Full Show Friday: 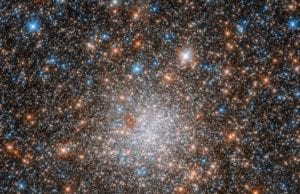 October 19, 2018
This glittering ball of stars is the globular cluster NGC 1898, which lies toward the center of the Large Magellanic Cloud.