A performance with Cory Wong will sit at the midpoint of season six, where the group will reimagine the music of The Beach Boys, John Adams, and George Gershwin on Saturday, January 30th. Richard Bona will then join Nu Deco Ensemble on April 10th, where they will perform the music of Earth, Wind, & Fire and Valerie Coleman. Season six will finally wrap on Saturday, May 15th, with the world premiere of orchestral work with Cory Henry, performing the music of Dr. Dre, Jason Matthews, and Sam Hyken.

Tickets for Nu Deco at the Bandshell are available now, here. Tickets for a season pass start at $50, with single shows available for $12. All performances will take place on Nu Deco’s custom platform in HD quality. Members will receive behind-the-scenes access to shows, invitations to special events, and priority access as soon as the band can host small audiences at the venue. Head to the group’s website for more information. 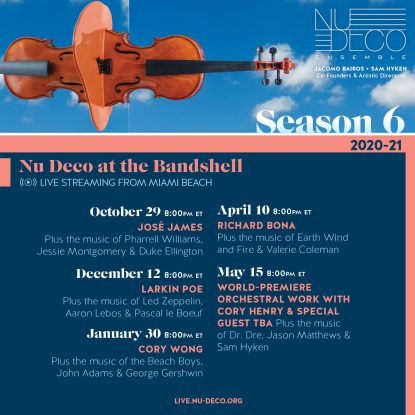 March 12, 2021
Sitting for long hours hunched over a keyboard is terrible for your neck and back, a problem that’s only been exacerbated as more people... Zuck Slowly Shrinks and Transforms Into a Corncob Ahead of Apple’s...

March 18, 2021
Facebook has pushed back against Apple’s planned rollout of anti-tracking tools at every possible opportunity, but now the social media giant seems to be...

Some Amazon Drivers Have Had Enough. Can They Unionize?

Want to Make Energy and Save Water? Slap Panels on Canals