Pigeons Playing Ping Pong have revealed that this year’s Halloween concerts will have a “Flockbuster” theme. The sold-out, two-night run of drive-in concerts at The Diamond in Richmond, VA October 30th—31st will see the bird band covering songs from classic movie soundtracks.

While the shows themselves are sold out, fans are still able to livestream both concerts via Fans.live. Pigeons are back on the road for the remaining three shows of their Time To Drive-In fall tour on October 24th with a concert at Smoky Mountain Event Center in Asheville, NC.

“On our last tour before the pandemic, we visited the only remaining Blockbuster Video store in the world and had an absolute blast walking around reliving our childhood,” Greg Ormont said in a press release. “Fast-forward to our current drive-in tour, we found ourselves naturally teasing songs from classic movies and felt a wave of similar nostalgia. Suddenly it all clicked and Flockbuster Halloween was born. With such an open-ended theme, there’s no telling which memories we’ll stir up for the Richmond Flock and those streaming at home.”

To order the livestreams for the Pigeons Playing Ping Pong “Flockbuster” Halloween run at The Diamond in Richmond, VA head over to Fans.live. 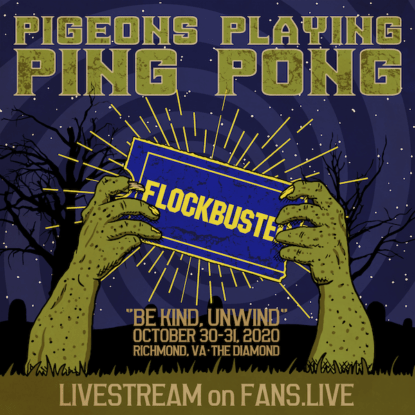 May 14, 2018
When Tumbleweed erupted onto the Aussie scene with their 1992 self-titled debut album, no one could have predicted how pivotal some of those songs...