Trey Anastasio continued his The Beacon Jams virtual residency on Friday night with the second of eight weekly live performances from the empty Beacon Theatre in New York City. Much like on last week’s first night of the run, fans tuning in didn’t know who would be onstage for The Beacon Jams Night 2. When the feed turned on and panned out from Cyro Baptista‘s distinctive percussion kit, it revealed the same core lineup as Night 1, a horn-less Trey Anastasio Band lineup featuring Trey, Cyro, drummer Russ Lawton, bassist Tony Markellis, and keyboardist Ray Paczkowski.

After some tribal tones from Cyro called the streaming audience to attention, the band dove into “Gotta Jibboo” at full bore, nimbly churning out what would be their longest jam of the night on the very first song. While seeing perhaps the “jam of the night” so early on may typically indicate a not-terribly-exciting show, this performance defied that notion. Rather than off-the-cuff improv, The Beacon Jams Night 2 was highlighted by the musical fruits born of detailed preparation and composition. But we’ll get to that…

Next up was “Undermind”, one of many songs dedicated to a specific fan or group of fans tuning in. Whether it was a friend of Trey’s celebrating a milestone (like approaching five years of sobriety) or dealing with tragedy (like losing their homes to the fires out west) or a Twitch commenter whose story caught his eye, Anastasio took every opportunity to connect with someone out there in the world, bringing them—and, by extension, all of us—a little closer to that empty theater on the Upper West Side. As advertised, Trey seems to truly view these shows as a homing beacon for a community spread to the four corners of the Earth in uncertain times. It’s a beautiful thing to witness. 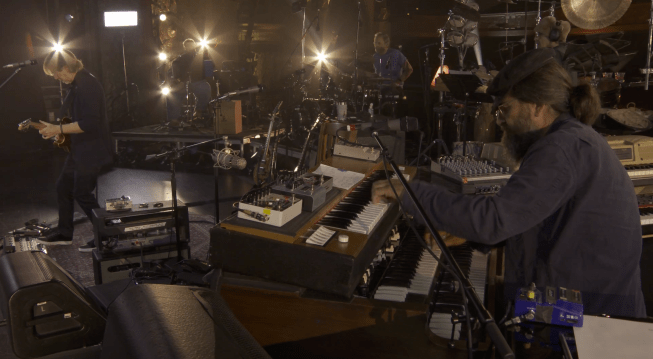 [Screengrab via The Beacon Jams Night 2]

After some discussion among the band, Trey joked. “I’m a notorious mind-changer, so I have to tell the band members what we’re gonna play.” That choice wound up being the “world premiere” of the Eckhart Tolle-inspired “Evolve“, one of the many Lonely Trip songs Anastasio released from his home just a few blocks from the Beacon during quarantine earlier this year. Trey took a moment to thank and dedicate the performance to the song’s co-writers, Tom Marshall and Scott Herman, before diving in with some reverb-laced guitar tones and string-like synths (a wink at surprises to come).

When the song finished, Ray remarked how the song had started off sounding one way, and then other things started happening and changing—slyly goading Trey to note that it had “evolved.” Following some more expressions of gratitude to donors and one of the few in-person viewers, decorated impresario Ron Delsener, the band dove into an ominous “Steam”, offering a refreshingly unique take from the version on Phish‘s Sigma Oasis that we’ve had on repeat since the album came out back in April.

Next, the rest of the band stepped back, and composer/Night 1 guest/frequent Trey collaborator Jeff Tanski stepped in on piano for one of the most memorable moments of the evening, a gorgeous piano/guitar duet on Phish classic, “Divided Sky”. Trey appeared just as entranced as the rapid-fire comment section as he watched Tanski play through his beautiful piano arrangement, noticeably hanging back on his Languedoc so as not to overpower this stripped-down reimagining of one of his oldest songs.

“Jeff Tanksi,” Trey mustered through spurts of approving laughter as the song finished. “That was some great piano playing.” We couldn’t agree more. Much like the rearranged “Stash” on which Tanski joined in last week, this updated take on an old favorite made it feel fresh and new again many decades down the line. We sincerely hope the jazz lounge Tanski songs keep coming throughout the run. At this point, we already don’t know what we’d do without them. Plus, it’s all the more fitting that The Beacon Jams “Divided Sky” got some extra preparation and attention, with the Divided Sky Fund serving as both the beneficiary of the residency and its spiritual guiding light.

Speaking of—yes, we’re calling this “The Beacon Jam Divided Sky” because, by the way, Night 2 featured an entirely different setlist from Night 1, and after seeing the many creative ways in which Trey has highlighted his repertoire over these last two Friday nights, we’re guessing the “No Repeats” game is afoot once again in the Big Apple. 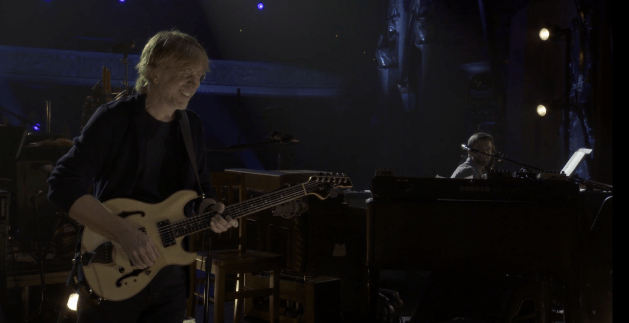 Trey pushed through some tuning woes during a “Sigma Oasis” dedicated to young Liam and Charlie, who checked in along with their parents from the chat before segueing into a bouncing “Back On The Train” featuring some subtle rhythmic notes of “No Men In No Man’s Land”. After responding to some more comments, Trey acknowledged the request of one viewer who had read about an escaped ocelot in Texas with a rocking “Ocelot” in its honor.

From a visual perspective, the incredible 201 Productions team behind the cameras offered some new perspectives on Night 2, including a shot from the Beacon balcony that appeared for the first time during “Ocelot”. Night 2 saw the crew utilize more than a few new angles, and you can only expect the visuals to get better and more engaging as they continue to settle in and explore the space over the next six weeks.

Next, Trey grabbed his acoustic for what appeared to be the solo portion of the evening. As he worked through a lovely “Strange Design”, however, that prediction was proven incorrect as the lights came up on a string quartet (Katie Kresek and Maxim Moston on violin, Rachel Golub on viola, and Anja Wood on cello) onstage alongside the guitarist. A slow, rootsy “Water In The Sky” with string accompaniment came next before Trey proudly christened them the “Rescue Squad Strings”.

From there, Trey put down his guitar and picked up the microphone, a rare sight for the guitarist that evoked his performance of David Bowie‘s “Rock ‘n’ Roll Suicide” on Halloween night 2016. After acknowledging some commenters from Mexico by waxing nostalgic about his last show—with Phish in Mexico earlier this year—Trey led the Rescue Squad Strings through the live debut of Lonely Trip tune, “The Greater Good“. The rest of the TAB team joined Trey and the Rescue Squad from there for a flowing “Greyhound Rising”, Trey once again hanging back on guitar so as not to overpower the soothing arrangement.

Taking another moment to express his gratitude, Trey thanked the many generous fans in the audience who had pushed The Beacon Jams fundraising total past $100,000 during “Greyhound Rising” (as I write this now the following morning, the total sits above $140,000, nearly three-quarters of the way toward to initial goal after just two weeks). He used the opportunity to provide some perspective on these trying times, relating his views on what events are “good” and “bad” through his own experience with addiction and recovery. Sometimes, “bad times” can become “good times” with a little time and reflection. “Maybe 2020’s not the worst year,” he surmised.

With that, TAB and the Rescue Squad Strings launched into their last 9-piece number of the night, a fantastic rendition of “Wolfman’s Brother” unlike any we’ve heard before. This one is worth revisiting many times over. When’s the last time a string quartet legitimately had you dancing?

With TAB back in rock formation, Cyro used one of his many unusual instruments to lead the band into “No Men In No Man’s Land”, a particularly appropriate song for a band playing an empty theater. After hanging back with the strings, Trey let out his excitement in spades on this excellent “No Man’s Land”. Trey called out one commenter with the “most important” insight of the night—”Tony is an absolute beast”—before issuing another unexpected highlight: a “Miss You” that rose to a soaring peak despite some more tuning issues.

Trey answered a commenter by declaring his cat, Joey Anastasio, his greatest inspiration before shifting into high gear for a searing “I Never Needed You Like This Before“. Of note, you may have noticed “Joey Anastasio” manning moderator duties in the Twitch chat threat. Good kitty!

Next, the band launched into a cerebral “Plasma” that bubbled and brooded its way through ten minutes of improv before dissipating into an especially lovely “Waste”. Finally, a spirited “Ghost” roused the spirits of the historic room to drive The Beacon Jams Night 2 home.

The Beacon Jams Night 2 (10/15/20) is now available to stream via LivePhish. If the first week was any indication, you can expect some video selections from the show to pop up on Trey’s YouTube in the next few days. What other surprises are in store at The Beacon Jams? It’s anyone’s guess. Tune in next Friday—same Trey time, same Trey channel.

This performance was part of The Beacon Jams series and featured the debuts of Evolve and The Greater Good and the TAB debut of I Never Needed You Like This Before. Divided Sky was only Trey accompanied by Jeff Tanski on piano, Trey teased No Men In No Man’s Land in Back On The Train. Trey teased Back in Black before Strange Design. Strange Design through Wolfman’s Brother featured The Rescue Squad Strings (Katie Kresek and Maxim Moston on violin, Rachel Golub on viola, and Anja Wood on cello), with Strange Design and Water in the Sky featuring just Trey on acoustic guitar, The Greater Good with Trey only on vocals (no guitar), Greyhound Rising and Wolfman’s Brother with the full band, and Wolfman’s Brother with Trey on acoustic guitar. Trey quoted Rescue Squad when introducing The Rescue Squad Strings after Wolfman’s Brother. Trey teased Let It Grow in No Men In No Man’s Land. Trey quoted a line from Poltergeist before and during Ghost’s intro. Where to Stream the 2019 Oscar Nominees

January 22, 2019
Oscar season is officially upon us, with films like Black Panther and A Star Is Born now up for the holy grail of awards... November 24, 2020
Infants' brains may be shaped by levels of stress their mother experiences during pregnancy, a brain scanning study has revealed.

Taking a shine to polymers: Fluorescent molecule betrays the breakdown of...