Widespread Panic will honor their late drummer Todd Nance with a special tribute show dubbed Still Right Here this Sunday. The webcast, set to feature a myriad of artists, will air at 8 p.m. ET prior to the weekly installment of Never Miss A Sunday Show. Tune in below:

Additionally, Still Right Here will include never-before-seen footage of Widespread Panic during their Another Joyous Occasion Summer Tour in 2000. The program is produced by Tammy Nance, Todd’s faithful wife for 30 years, and directed by Christopher Hanson (The Earth Will Swallow You). Presented by Nugs, the webcast will also serve as a fundraiser for Nuci’s Space. Founded in Athens, GA in 1999, Nuci’s Space is a non-profit organization that works toward suicide prevention with a focus on musicians.

Tune into the Widespread Panic celebration of Todd Nance Still Right Here on Sunday at 8 p.m. ET on Nugs or the band’s Facebook and YouTube pages, followed by this week’s presentation of Never Miss A Sunday Show. 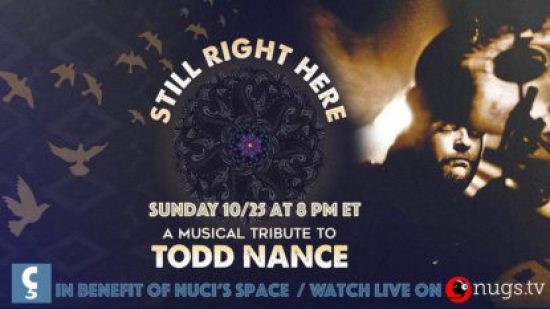 David Crosby & Stephen Malkmus & The Jicks To Appear On...

April 13, 2018
Watch David Crosby and Stephen Malkmus & The Jicks join Chris Thile in New York City for the next episode of ‘Live From Here.’ The...