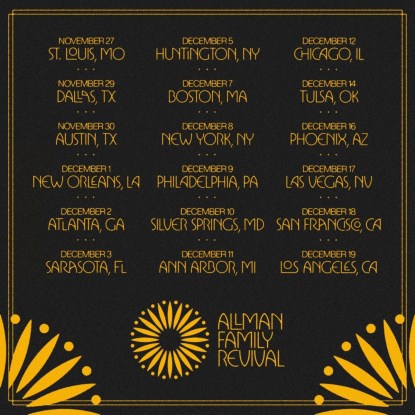 The Allman Family Revival began on what would have been Allman Brothers Band co-founder Gregg Allman‘s 70th birthday, December 7th, 2017. On that day, his son Devon gathered up an all-star cast of musicians who had toured with his father, jammed with him, and inspired him for a star-studded show. Four years later, the tradition has ballooned into a coast-to-coast tour with a nightly format reminiscent of The Band‘s iconic The Last Waltz, with The Allman Betts Band serving as the house band for an evening full of guest sit-ins.

“Hard to believe we are in the fifth year of The Allman Family Revival shows,” Devon said in a statement. “This year is going to be bonkers! 18 cities, coast to coast in historic theaters with our beautiful, talented friends jamming all night long. Can’t wait!”

Tickets for the fifth annual Allman Family Revival go on sale to the general public on Friday at 11 a.m. ET. Fans can access a pre-sale beginning on Wednesday using the code “REVIVAL2021”. For tickets and more information click here. Scroll down to see a full list of tour dates.

September 16, 2021
You can learn a lot about animals by simply watching them. But some secrets can only be revealed in the dark ... with an...