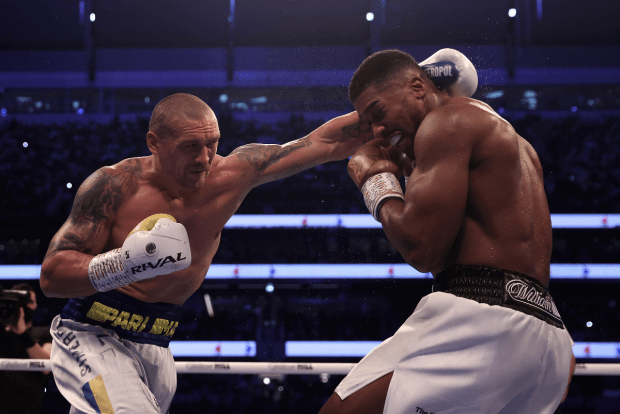 Heavyweight Anthony Joshua wasn’t quite prepared for the Oleksandr Usyk he encountered in the ring in London Saturday. Even though the Ukrainian gold medal winner was a little older, shorter, and wielded a little less power, he handily outboxed Joshua round by round. The judges’ scorecards told the tale: 117-112, 116-112, 115-113, all for Usyk.

Joshua didn’t dispute the results, but his promoter Eddie Hearn revealed after the match that he was “already talking about ‘I’ll win the rematch.” And thanks to an immediate rematch clause in the fighters’ contracts, he will get that.

The new heavyweight champion, in the words of Yahoo! sports columnist Kevin Iole, “put on the performance of a lifetime” even though he entered the ring with several disadvantages on paper, such as a 3-inch height difference and punching power.

Usyk said after the match that he “had no objective” to score a knockout, “so at the beginning I hit him hard.”

Those early punches set the stage for Joshua to remain back on his heels till the bitter end.

While Usyk celebrated his new heavyweight titles, Joshua left the ring in disappointment, though it seemed like a case of self-recrimination, not bad sportsmanship, as the fighters were photographed in a friendly pose together in the locker room afterward.

It’s too early to know when Joshua will get his chance at redemption, but according to Yahoo, Usyk will attend the “Oct. 9 heavyweight fight in Las Vegas between WBC champion Tyson Fury and ex-champion Deontay Wilder, Top Rank’s Bob Arum told Yahoo Sports.” (We added hyperlinks in the fighters’ names.)

Thanks to that rematch clause that Joshua has already invoked, the Ukrainian champ will have to face him again before he gets a chance at taking on the winner of the Wilder-Fury match.