Canadian comedy great Norm Macdonald has succumbed to a nine year battle with cancer. Macdonald is best known for being a core cast member of Saturday Night Live throughout the 1990s.

Macdonald started out performing standup comedy in Ottawa, Ontario in the mid-1980s. He got his first big break when he was hired as a writer for the fifth season of Roseanne. However, he wrote just two episodes before leaving to join the cast of Saturday Night Live.

Macdonald anchored SNL‘s Weekend Update segment from 1994–1997. Following the example of Chevy Chase, Macdonald helped cement Weekend Update as one of SNL‘s most prestigious segments. Weekend Update has since been helmed by the likes of Tina Fey, Jimmy Fallon, Seth Meyers and Amy Poehler.

After leaving SNL, Macdonald created and starred in three seasons of The Norm Show, a sitcom that followed the travails of the fictional former hockey player, Norm Henderson (played by Macdonald). More recently, Macdonald was known for his podcast, Norm Macdonald Live, which featured conversations with the likes of David Letterman, Jerry Seinfeld, Sarah Silverman, Caitlyn Jenner and Jim Carrey.

Silverman responded to Macdonald’s passing on Twitter. “Norm was in a comedy genre of his own. No one like him on this planet. Please do yourself a favor and watch his stuff. He was one of a kind of all time.” 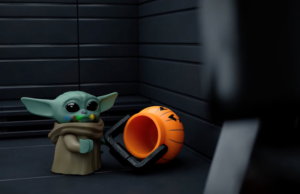 Lego and Star Wars Are Getting Into the Halloween Spirit Very...

September 16, 2021
Is there a better or more appropriate time to celebrate Halloween, aka October 31, than September 16? Not according to Lego, apparently, since it’s...