Courtney Barnett on Tuesday shared a new music video for her latest single, “Before You Gotta Go”. The track is set to appear on the singer-songwriter’s third full-length LP, Things Take Time, Take Time, out on November 12th via Mom+Pop Music/Marathon Artists.

Whereas the song “Before You Gotta Go”, released last month, takes a deeply personal look at the intimacy of a relationship going through a rough patch, the music video looks outward in a decidedly oddball way. Barnett travels beautiful landscapes capturing sounds as an ethnographer. Along the way, chasing everything from dogs to kangaroos, she encounters larger-than-life versions of herself, which she also attempts to capture on tape.

“Making this clip was an interesting experience for me,” director Claudia Sangiorgi Dalimore said in a statement. “I love how brilliantly simple Courtney’s idea was, it brought real joy shooting part of it together, just me, her and my DOP with the other part being two long days directing over zoom across the Tasman Sea. I watch it now and feel that sense of peace, that potent calm you can only get immersed in the beauty of nature.”

While perhaps the video’s connection to the song may not be as tangible, it could draw parallels to a different project. Along with the video, Barnett launched an interactive stem mixer that allows users to alter previously released Things Take Time tracks “Before You Gotta Go” and “Rae Street“. Using the tool, fans act as their own ethnographer as they are able to capture their own reality in Barnett’s music by isolating, muting, and mixing different tracks. A statement notes that in time the mixer will host additional mixes from the album.

Watch the new music video for “Before You Gotta Go” by Courtney Barnett and click here to access the interactive mixer. Things Take Time, Take Time is available here for pre-order. 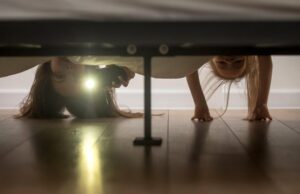 The ‘Storage Space’ Under Your Bed Is a Mess (but You...

September 21, 2021
For many of us, the space underneath the bed holds nothing more than a stack of old photo albums, a few stray socks, and...