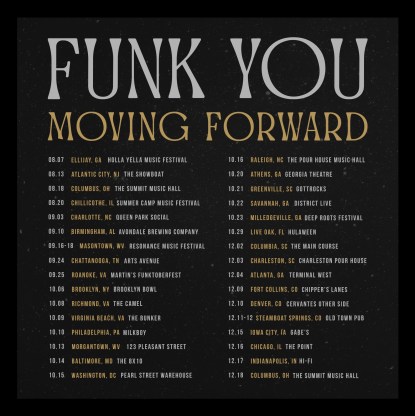 From the serene opening keyboards of the title track, Funk You’s songwriting maturation is  apparent. As Gavin Hamilton sings in the lead single, “So buckle up, strap in, and let the party begin.”

At its core, Funk You retains its identity as a funky, rockin’ good time on tracks like “My House”. There is also a sincerity that comes from the group’s ten years traveling across the country, with the hardships of retaining relationships while on the road chronicled in the companion tracks “Long Distance Romance” and “Long Distance Lovers”.

“Moving Forward really is exactly what it sounds like,” says drummer/vocalist Will Clark. “We’re truly proud of what we’ve accomplished over the last decade and we can’t wait to see what is coming next. I think, even though the last year has been tough, we’re happy to be pushing ahead and playing more shows. We’re just happy to be back out there.”

Related: Southern Avenue Continues To Diversify Styles On ‘Be The Love You Want’ [Stream]

Though Moving Forward was a product of the pandemic, Funk You is now back out on the road where it belongs. The band’s extensive fall tour will take it through familiar locations including Resonance Music Festival, Brooklyn Bowl (NY), Georgia Theatre, Hulaween, Cervantes Other Side, Old Town Pub, and many more. Scroll down to see a full list of tour dates and visit Funk You’s website for tickets. Moving Forward is available now across streaming platforms.

Is it a bluff? Some in Hungary and Poland talk of... 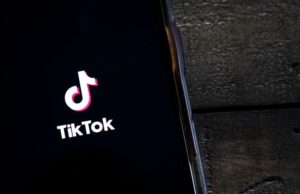 September 27, 2021
TikTok is joining the ol’ 1 billion user club, with the ByteDance-owned video platform reporting on Monday that it now officially has as many...

Bitcoin Bros and Nuclear Bros Have Found Common Cause