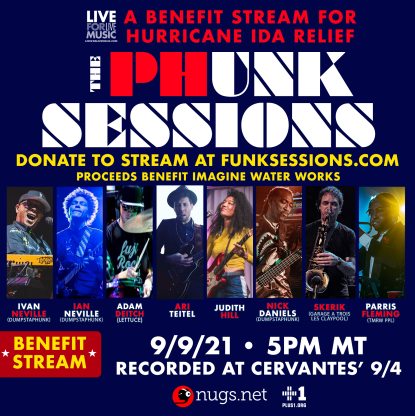 If you weren’t one of the lucky ones in the building at The Phunk Sessions‘ NOLA-flavored Phish late-night last Saturday at Denver, CO’s Cervantes’, have no fear—Live For Live Music and Nugs.net are hosting a stream of the entire performance on Thursday, September 9th at 7:00 p.m. ET to benefit a cause close to the hearts of all involved: the victims of the damage waged on Louisiana by Hurricane Ida.

While the show itself raised money for Conscious Alliance, the extensive effects of Ida prompted The Phunk Sessions to turn the fundraising efforts of the livestream toward those affected by the storm. Donations generated via Plus 1 from The Phunk Sessions livestream on 9/9/21 will benefit Imagine Water Works‘ Mutual Aid Response Network, a group of Louisiana residents that activates during floods, storms, and other natural and manmade disasters. All donations to this fund will support relief and recovery efforts in the wake of Hurricane Ida, as well as essential preparation for the rest of hurricane season. Donate any amount below or via FunkSessions.com to get your link to the stream.

Donate Any Amount To Stream

Of note, the band was meant to feature Dumpstaphunk vocalist/multi-instrumentalist Tony Hall, but he was drafted to fill in with Dave Matthews Band at The Gorge for the weekend after bassist Stefan Lessard and drummer Carter Beauford tested positive for COVID-19. In his place, the band featured Grammy-nominated, New Orleans-based guitarist Ari Teitel—who happened to be in Denver after having been evacuated from his New Orleans home due to Hurricane Ida.

“There is no city that has influenced what we do at Live For Live Music more than New Orleans,” Kunj Shah, owner of L4LM and The Phunk Sessions organizer, said. “We are all devastated by the damage the hurricane has caused to the city and its direct effect on our musical family and friends. With so many incredible NOLA-based musicians on this lineup, we decided to use the opportunity to make a difference through the power of music.”

If you are able, please donate to Imagine Water Works via Plus 1 here to help aid their ongoing Hurricane Ida relief efforts. Stream the show in full below.

Check out a gallery of photos from the performance below courtesy of photographer Courtney Scout. 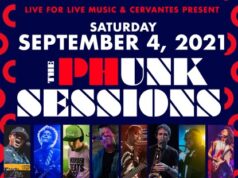 September 24, 2021
This week, we look at the new Surface hardware and try to determine how much experimentation your workflow can withstand.