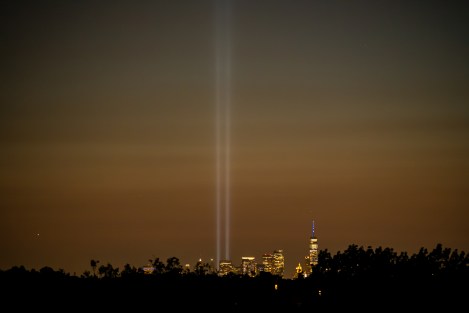 The two-night stand was a thrilling one for the Louisville-bred outfit and its fans following speed bumps both weather- and COVID-related during the tour’s first two weeks, and the fact that the Queens, NY tennis stadium played host to the Jacket’s final pre-pandemic gigs in 2019 only added to the symbolic weight of the weekend.

The importance of this particular weekend in New York City—the twentieth anniversary of the 9/11 attacks—also hung over the proceedings, the ghostly, skyward memorial spotlights at the World Trade Center clearly visible from the venue’s highest seats.

This being the first multi-night run of the tour, My Morning Jacket expanded its setlist offerings over the course of the two shows to include songs from throughout the band’s catalog as well as selections from its forthcoming ninth album, due out in October.

On Friday, MMJ worked through numbers from all but one of the band’s albums (The Tennessee Fire), including memorable renditions of fan-favorites like “Wordless Chorus”, “Off the Record”, “Dondante”, and more as well as the live debut of “Love Love Love”, one of the tracks set to appear on My Morning Jacket next month.

The Friday show also featured a number of selections from The Waterfall II—the long-shelved, recently released collection of companion material from the sessions that produced 2015’s The Waterfall—including “Feel You”, “Run It”, and a thrilling, set-closing “Wasted”. The band closed the show with an encore featuring favorites like “Touch Me I’m Going To Scream Pt. 1”, a version of “Phone Went West” with a jam on Sly & The Family Stone‘s “Everyday People”, and a climactic “Mahgeetah”.

On Saturday, September 11th, the band quickly set the tone for the evening with “Victory Dance”. After a highlight early-show pairing of Waterfall II songs in “Climbing The Ladder” and “Spinning My Wheels”, the Jacket once again surprised audiences with the technicolor debut of My Morning Jacket track, “In Color”, followed by a pair of Marvin Gaye covers in “Mercy Mercy Me (The Ecology)” and “What’s Going On” that seemed to pay subtle homage to the day’s historical significance.

After closing the set on a wave of momentum with “Lay Low”, “Steam Engine”, and “Dancefloors”, My Morning Jacket returned to open the encore with the new track, “Regularly Scheduled Programming”. After a rendition of “Gideon”, MMJ added a touch of encore symmetry by working in “Touch Me I’m Going To Stream Pt. 2” before closing out the run with the customary “One Big Holiday”.

See below for nightly setlists and a selection of videos and audio recordings from this weekend’s My Morning Jacket/Brittany Howard run at Forest Hills Stadium. You can also check out photo galleries from each of the two shows courtesy of photographers Kevin Cole (Old King Cole Photography, Friday) and Andrew Blackstein (Saturday).

[Video: The City Is Listening NYC]

Set: Wordless Chorus, Circuital, Spring (Among the Living), Lucky to Be Alive, Feel You, I’m Amazed, Love Love Love*, Off the Record, Wonderful (The Way I Feel), Believe (Nobody Knows), In Its Infancy (The Waterfall), Run It, Dondante, Wasted

$w/ snippets from “The Bear”

The post My Morning Jacket Delivers Pair Of Powerful Shows In Return To Forest Hills [Photos/Videos/Audio] appeared first on L4LM.

September 22, 2021
Astronomers have discovered an enormous cavity in space while mapping interstellar dust. The sphere-shaped phenomenon may explain how supernovae lead to star formation.