For two decades, one question has plagued mankind: what song is “Tribute” by Tenacious D about? What composition holds the title of the “greatest song in the world” according to Jack Black and Kyle Gass? Though many were resigned to never learning the song’s secret, The D finally professed the answer during an interview with Spencer Kaufman over on Heavy Consequence.

JB and KG are currently promoting the 20th-anniversary edition of their platinum-selling, debut EP, Tribute, out in November. During the Zoom interview, Kaufman brought up Elton John‘s recent admission that Metallica‘s “Nothing Else Matters” was “one of the best songs ever written,” a statement that brought frontman James Hetfield to tears on Howard Stern.

In that spirit of praise, Kaufman asked the metal duo if they finally want to acknowledge who has earned the title of greatest song in the world. In the 20 years since “Tribute” first rocked our socks off, plenty of speculation has been thrown around. Musically, “Tribute” bears some notable resemblances to Led Zeppelin‘s “Stairway To Heaven”, which would be a safe—if disappointing—pick for greatest song in the world.

During the interview, Gass confirmed the veracity of the “One” anecdote while also casting doubt on any larger meaning behind Black’s avid Metallica fandom.

“As I remember it, Jack, [it was] a late night, rainy, inside the car, and Jack said, ‘You gotta check out this song by Metallica,” Kyle recalled. “It’s ‘One’ and it’s the greatest song in the world.’ But he also said that every one of their songs is the greatest song in the world. … It was a mindblower, for sure. ‘One’ I think really influenced ‘Tribute’ as much as, say, ‘Stairway.’”

Moving ever closer to the point, Kaufman finally asked the question that man was perhaps not meant to know: what is the greatest song in the world?

“Should we tell him, Kage?,” Black asked, “Should we finally come clean?”

“I think it’s time. I think Spence has earned it,” Gass replied.

“It actually is the greatest song in the world,” Black revealed.

With the mystery of Tenacious D’s “Tribute” finally revealed, mankind can now rest knowing we have gathered all there is to know. Spencer Kaufman wept, for there were no more worlds to conquer.

Head over to Heavy Consequence to watch the clip and scroll down to revisit the greatest song in the world. The 20th Anniversary Super Power Party Pack edition of Tribute—including a CD reissue of the EP, a cassette of the band’s 1995 demo, and a replica 1995 show flyer signed by Black and Gass—is available now for pre-order through the band’s store.

The post Tenacious D Finally Reveals The Greatest Song In The World From “Tribute” [Video] appeared first on L4LM. 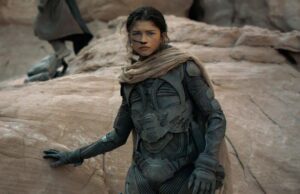 October 18, 2021
The latest iteration of Dune, set to hit theaters October 22, will serve as a potent reminder of our troubled relationship with water, particularly...