Each Sunday evening from 7-9pm you’ll find EQXposure on WEQX, featuring two hours of local music from up and coming artists. Tune into WEQX.com this Sunday night to hear new music from Paul Moody, the William Deuel Band and many more!

WEQX has long been the preeminent independent station in the Capital Region of New York, broadcasting from Southern VT to an ever-expanding listening audience. NYS Music brings you a preview of artists to discover each week, just a taste of the talent waiting to be discovered by fans like you.

Folk singer-songwriter Paul Moody is a recent Woodstock transplant from Chicago, who also performs under the name Moody Jr. His upcoming album Songs From Youth, out this October, is preceded by the contemplative, personal single “Breaking Into Cars.”

Moody’s music is immersive and ambient, with detailed soundscapes you can almost meditate to. The best example is “All I Had Was You,” his most-played song on Spotify with almost 500K streams.

Formed in Saratoga Springs in 2018, The William Deuel Band is a unique amalgamation of the Rolling Stones and Nirvana, with some country and blues thrown in for good measure. Their newest full-length effort, Moment in Time, features frontman William Deuel, drummer Chris Reed, Jr., and bassists Jason Brown and Ethan Henderson. Highlights include “Ballroom Bananas” and “Can’t Wait on Sunday.”

“Situational Comedy” is the final track on The Great Pacific Garbage Patch’s debut album, You’ve Changed. Despite its title evoking images of Michael Scott or Leslie Knope causing hilarious hijinks at their workplace, this pop punk tune is bleak and anxious, referencing The Truman Show and a self-conscious feeling of being watched by an audience: “And it’s been a good run / I just hope that I could give the people what they want.” The Albany trio is made up of drummer Jordan Demarest, bassist Dan Haggerty and lead singer and guitarist Will Kachidurian. 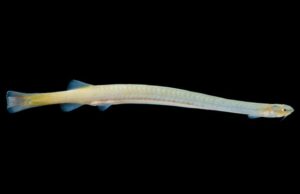 How Transparent, ‘Vampire’ Catfish May Travel Unseen Through the Amazon River

September 20, 2021
The Amazon River basin’s most notorious bloodsuckers may not be all drama and gore after all. New findings suggest that some candiru—the vampire fish—may...