[UPDATE 10/12/21]: Van Halen co-founder David Lee Roth might not be retiring after all.

In an interview with the Las Vegas Review-Journal on October 5th, David Lee Roth announced his retirement would commence immediately following a five-show residency at the House of Blues Las Vegas on December 31st, January 1st, 5th, 7th, and 8th.

Just ten days later, however, Roth casted doubt on that proposition with a single photo posted to Twitter. On Monday, October 11th, Roth posted a picture of the tour poster commemorating his upcoming Las Vegas residency.

Posted without a caption, the poster reads: “The Last Tour, Unless It Isn’t.”

While this certainly isn’t definitive proof that Roth has shelved his retirement plans, it does pique curiosity about what’s to come should Roth feel like the five-night Vegas residency doesn’t satiate his desire for performing. Be sure to keep an eye out for additional information as this story is developing.

“I am encouraged and compelled to really come to grips with how short time is,” Roth said in an audio interview, “and my time is probably even shorter.” He indicated that the death of Eddie Van Halen last October played a factor in his decision, referring to the guitarist’s death of throat cancer at age 65 as, “the departure of my beloved classmate recently.”

Whatever his reasons for retiring, Diamond Dave made clear that this will be a grand finale to a musical career spanning nearly 50 years.

“I’ve got a band that is doing what Al [Alex Van Halen] and I used to call a ‘block,’ that means 75 rehearsals for one show,” he told the Review-Journal. “We are bringing it in classic VH [Van Halen] style. Alex and I are the only version, that was his message. There is no other variation. There is no torch being passed. There is no other side to this coin. This is classic, in-your-face Van Halen.”

In the eight-minute interview—which plays more like a public statement than an artist interview—Roth did not state whether or not he would be joined by Alex Van Halen during the coming Vegas residency.

Roth co-founded what would ultimately be known as Van Halen in 1972 in Pasadena, CA with brothers Eddie Van Halen (guitar) and Alex Van Halen (drums). In 1974, the band was joined by bassist Michael Anthony to form the classic Van Halen lineup that remained until 1985. Following the 1984 Tour, Roth left the band to focus on solo endeavors at which point Sammy Hagar became the lead singer for Van Halen.

Following an ill-fated push for a reunion in 1996—with a memorable publicity stunt at the MTV Video Music Awards to plug a Best Of compilation—the bandmates remained estranged until 2006 when they reformed with Roth on vocals and Eddie’s son Wolfgang Van Halen on bass, the lineup that would remain through the rest of Van Halen’s career which effectively ended on October 6th, 2020 with the death of Eddie Van Halen.

Many conspiracy-minded VH fans have taken to the internet to point out the curious timing of Roth’s retirement, suggesting it’s been planned for 30 years. Per Loudwire, Diamond Dave may have dropped clues to his retirement in the music video for the title track to his 1991 solo album “A Lil’ Ain’t Enough”. In the video, Roth visits a fortune teller who predicts his future, showing a haggard, double-chinned version of the singer arriving at the Anaheim Stadium with a sign out front that reads “Diamond Dave, THE ABSOLUTE FINAL TOUR: SOLD OUT.” The date of the concert is shown as October 10th, 2021, Roth’s 67th birthday.

Watch the eerily prescient music video for “A Lil’ Ain’t Enough” by David Lee Roth below and head over to the Las Vegas Review-Journal to hear his complete retirement announcement. Tickets for the singer’s final run of shows are on sale via his website.

David Lee Roth announced his retirement today… just 9 days before his 1991 music video for A Lil’ Ain’t Enough predicted he would. pic.twitter.com/UFmMzajY40 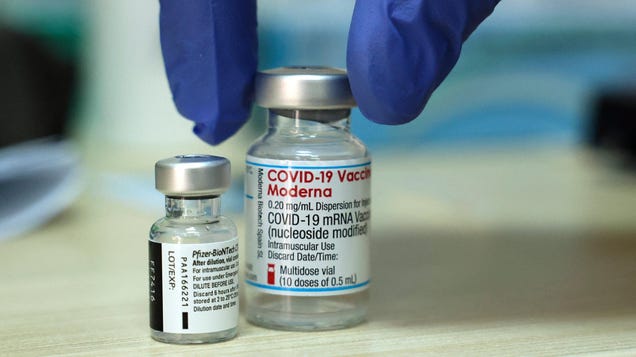 October 14, 2021
On Thursday afternoon, experts assembled by the Food and Drug Administration recommended boosters for older and high-risk Americans who originally got the Moderna ...