Orebolo will perform on December 2 at Tarrytown Music Hall in Tarrytown, New York. The trio will then play the Center for the Arts of Homer in Homer, New York on December 3. The first run ends on December 4 at Spruce Peak Performing Arts Center in Stowe, Vermont.

Mitarotonda, Anspach and Arevalo teamed up last year while on lockdown to play an at-home aGOOSEtic set for 11E1even Group’s Live From Out There series. They recently played a set at Goose’s Fred The Festival at LOCKN’ Farm in Arrington, Virginia.

“Starting this project was a source of relief for all of us, especially during such a crazy time,” said Anspach. “Our initial practice and recording space was inside our solarium – the vibe was really tranquil, and we wanted our listeners to share in that feeling. I’m stoked we have the opportunity to take this out on the road and perform in some incredible rooms.”

Avery Bradley Becomes the Butt of Social Media Jokes After Getting... 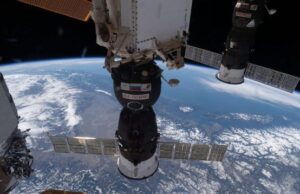 October 18, 2021
Late last week, a routine thruster test of a Soyuz spacecraft continued for longer than expected, causing the ISS to shift by nearly 60...

Neuroinflammation protein linked to worse survival in men with glioblastoma