The future is here, and it’s pretty weird. Hologram versions of early rock and roll stars Buddy Holly and Roy Orbison will hit the road for a joint run of shows dubbed the Rock N’ Roll Dream Tour. The announcement of the new joint hologram tour comes in the wake of a lengthy Roy Orbison hologram tour last fall.

Notes Brian Becker, Chairman and CEO of BASE Hologram, the company behind the tour, “These two men…defined the genre of rock and roll, from writing to recording to the standard band configuration, and they influenced everyone from Elvis to The Beatles.” As the tour website notes, “Accompanied by a live band and back-up singers, this cutting edge holographic performance and remastered audio will transport audiences back in time for an evening of Roy Orbison and Buddy Holly’s greatest hits onstage.”

“THESE TWO MEN…DEFINED THE GENRE OF ROCK AND ROLL, FROM WRITING TO RECORDING TO THE STANDARD BAND CONFIGURATION, AND THEY INFLUENCED EVERYONE FROM ELVIS TO THE BEATLES.

My father’s music meant the world to not just to us Orbisons but to millions of fans worldwide. Being able to reopen his legendary songbook and again hear his voice bounce off great concert hall walls is both a transcendent and cathartic experience. Dad jammed with Buddy in Lubbock Texas and helped change music history by turning Buddy on to Norman Petty Studios; Buddy later returned the favor by recording two of Dad’s songs on his first Cricket’s album. How beyond cool and special that these two great friends, now get to tour the world together.

Buddy Holly’s wife, Maria Elena Holly, also notes in a statement that both her late husband and the late Orbison were “Texans who shared a mutual respect and admiration for each other’s creative musical genius and brilliant songwriting abilities. I am proud to work with a company like BASE Hologram. Their long-time fans and a new generation of fans will now have the opportunity to see these great legends perform together in a unique setting, showcasing two of the finest, most influential, and beloved artists in music history.” 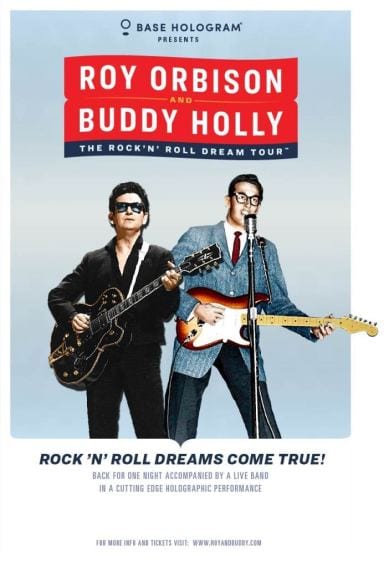 France stands by Greece over tensions in Aegean Sea – French...

July 10, 2020
After taking a two-and-a-half year hiatus following the release of six studio albums and the successful building of a vibrant, grassroots fanbase, Jimkata are...

Listen To Thelonious Monk Perform ‘Don’t Blame Me’ At A High...

Spectrum’s Hidden ‘Broadcast TV’ Fee Will Increase to Almost $200 a...