Forget the Wall; Plant a Hedge

I think that instead of building a wall along our southern border, we should plant a hedge. And granted the cooperation of the Mexican people, finance the planting of food trees and vegetable gardens that will provide some respite to travelers weary at the end of a long arduous journey, perhaps even employment for the more able among them.

That would be on the Mexican side, that is to say the south side. On our side we will build welcoming centers, complete with triage units, shelters a little more accommodating than cages, and then, through the arches cut into our hedge, gently admit the poor, tired, huddled masses into our midst. That’s what I say. What say you?!?

One of the worst first dates ever. My bad for choosing this film. 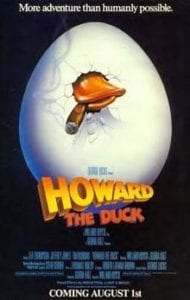 I remember the comic book as actually being pretty funny. But yeah, the movie was at least as bad as its reputation suggests. Really, really bad. Not even bad in a fun way. Just bad.

It was a fun movie though.

I love this movie even though it is a turd.

Instead of paying a fee to apply for asylum, immigrants from Central America should be suing the Trump Administration for destroying their homeland and causing them to flee due to climate change. They cannot grow coffee or corn for animals or any crop because of flooding, which washes the plants away and/or drought. Starvation together with violence from desperation gives them no option but to walk North.

Other nations are making great progress on climate change. Denmark is fully on renewable power. Sweden says they will be off fossil fuels in the near future. Norway is pushing electric cars and electric planes. Switzerland and Scotland are doing well also. Even in this country Gavin Newsom, governor of California has made progress for his state in spite of Trump and his 33 percent tariff on panels from China. New buildings can not get an occupancy permit unless photovoltaics for electricity are installed on the roof. School parking lots are covered with canopies that protect cars from sunlight and support solar panels. He has 5 million electric cars and is revamping the roads and “gas” stations to accommodate the new vehicles. The economy of California is greatly outpacing the national economy because of all the new economic activity.

What leadership is the Trump administration providing to combat climate change? Actually worse than none. He is going backwards. Trump is pushing for offshore drilling, drilling on public lands and in the Arctic Wildlife Refuge. Trump might be more responsible for climate change than any other single person. In fact people that suffered from the Midwest flooding, the wild storms in Texas, Florida, Puerto Rico, and the wildfires in California should be suing him also. Maybe he would wake up and realize we have a problem here and he can’t just keep taking money from the Koch Brothers while calling it “fake news.”`

June 5, 2020
The police union says the two officers who pushed over an elderly man "were simply doing their job".

Signal App Tips: Get the Most Out of Your Encrypted Chat

Graphic: What U.S. police are shooting at protesters

V-Spot: Not The Sex Life I Want