Along the canal district in Holyoke on Race Street is a new art gallery, PULP Art + Object, which held its grand opening on May 4. The gallery’s inaugural exhibit is by self-taught artist Dave Laro, whose work is inspired by Andy Warhol’s pop art aesthetic. Laro’s images feature 20th century comic books, magazines, film history, and pop culture blended together with subtle political commentary about life in the 21st century. 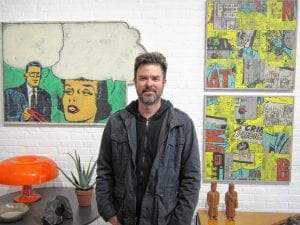 The gallery is owned by artist Dean Brown and interior designer Mary-Moore Cathcart, who are married. PULP represents an expansion from Home and Homme, a homeware boutique and art space the couple started in Amherst in 2014 and still own.

PULP features white brick walls, which draw the eyes to the pop art on display throughout the venue, and furniture and home decor that’s functional while still being artful pieces in their own right.

Brown said he hopes to be a part of the community in Holyoke with PULP by bringing student and professional artwork to the space with a wide range of price points and artistic styles. They also hope to store the works of at least 50 different artists in flat files, so that when an exhibit ends there’s still art available for patrons to purchase.

“Oftentimes we have this show and the art comes and then it disappears,” he explained. “Our idea is to have extensive art here … We want to support the artists in the community as much as we can by having a place where they can send people to look at their work.”

As for the main exhibit, “Dave Laro,” which is on display through June 7, the collection of works features 33 assemblage and silkscreen pop art creations. The art is a re-mix of sorts, taking comic books, old tabloid newspapers, toys, salvaged wood, board games, containers, and boxes and crafting that material into new works. 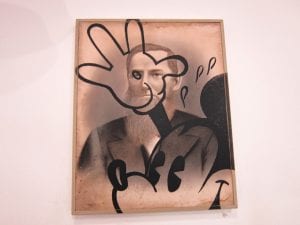 Laro’s work is rooted in visual storytelling, according to a press release from the gallery. He found his materials at flea markets and junk shops and his work focuses on breaking down stereotypes. The central idea of his work in this exhibit is that art is impossible to separate from current politics and social movements.

“Click-Bait,” is a piece that features a black-and-white photograph of a bearded man from sometime between the late 1800s to early 1900s. But superimposed on the photograph is the image of Disney mascot Mickey Mouse with his hand through the man’s face, while beads of sweat drip off Mickey.

With the title of the piece in mind, this work of art might be commenting not only on click-bait articles online, but our 21st-century culture of instant gratification. Underneath the attention-seeking hands of Mickey Mouse might be a nuanced portrait worthy of thoughtful contemplation that’s undermined by Mickey’s presence. 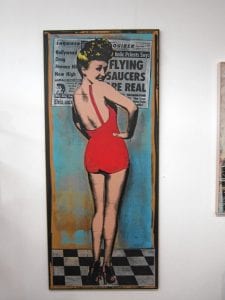 “Sure Thing” by artist Dave Laro.

Another piece, titled “Sure thing” features a pin-up style photo of 1940s actress Betty Grable. Initially, I wasn’t sure who the woman in the piece of art was, but Brown explained that the iconic photo of Grable was taken when she was pregnant. The photo itself is one of those images that’s ingrained in pop culture, but with the story behind the photo being less well known.

The hidden truth in that image is complemented by a tabloid newspaper in the background of the piece with a headline: “Flying saucers are real.” Both components sell a fantasy, with a pin-up image hiding a pregnancy and a tabloid trying to claim flying saucers are real without any proof. Objectifying women as part of a sexist fantasy becomes as out of touch with reality as UFOs. 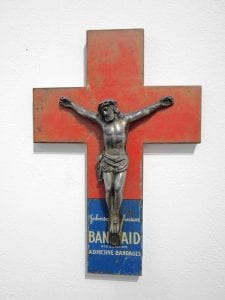 One of the most striking pieces on display is titled, “First-Aid Kit,” which shows Jesus Christ on a cross made of Band Aid boxes. There’s a lot to unpack with these images. First off, the image of Jesus being crucified is ingrained in our culture much more than any pop-culture reference. Jesus typically symbolizes faith and sacrifice. The fact that Jesus is being crucified on a commercial Band Aid box invites multiple interpretations. Is the artist saying that religion is a Band Aid? Is the art commenting about religion and industry dictating healthcare? Or maybe none of the above. If anything, “First-Aid Kit” does catch your attention right away.

These are just a few examples of Laro’s pop art on display at PULP. There are other pieces that are just as eye catching with plenty of hidden meaning to dig for beneath the surface.

Chris Goudreau can be reached at cgoudreau@valleyadvocate.com.

For more information about PULP and Dave Laro’s artwork visit www.pulpholyoke.com or  www.davelaro.com. PULP is open Thursday through Sunday at 80 Race St., Holyoke.

Stagestruck: Curtain Up on Stage 3

August 12, 2019
Former vice president Joe Biden, the frontrunner for the 2020 Democratic presidential nomination, called on Monday for reinstating a ban on assault weapons and...

Apple Wants to Claim All of Fruitdom As Its Intellectual Property

August 10, 2020
Image: Change.org petition by PrepearPears: the arch-goddess of the fruit pantheon, the inspiration of Cézanne, and to the untrained eye,

Fallout 76 Doesn’t Totally Suck Anymore, Try it With All the...

A Vampire Horror About Stating the Obvious