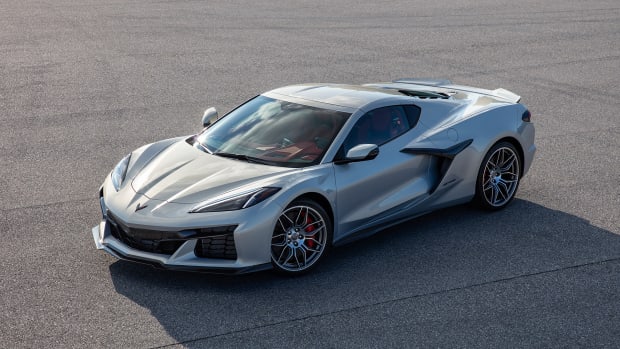 This is the first official image of the 2023 Chevrolet Corvette Z06, the next-level trim of the crusading C8 Stingray that ushered in the ‘Vette’s midengined era.

No words accompany the photo, so take a close look. Compared to the Stingray, the side air intake jumps out with a more symmetrical “arrow” shape that almost resembles a Mercedes-Benz logo rotated 90 degrees. That’s surely a coincidence, even if the ‘Vette’s performance is bound to be stacked against pricier European supercars upon debut.

CNET’s Roadshow points to an aggressive front aero kit, particularly with regard to the more angular front splitter and air dam. Instead of five-trident wheels, the rims feature a multi-spoke design with seven distinct outlines that allow viewers to see straight through to some big honkin’ red brakes.

The rear wing is also a solid piece that appears to sit flush with the car, instead of a hollow shape through which air can flow.

This minutia is only newsworthy in the absence of details regarding the Z06’s engine. Video released earlier this year all-but-confirmed to authorities like Car and Driver that the Z06 will run a screaming 5.5-liter flat-plane V8, possibly with over 600 horsepower.

That orientation will allow for a higher, Ferrari V8-rivaling redline—between 8,500 and 9,000 rpm. The current Stingray’s lower-pitched growl is emitted from a cross-plane V8, for comparison’s sake.

We’ll see how “super” the American supercar gets when the 2023 Chevy Corvette Z06 is revealed on October 26.